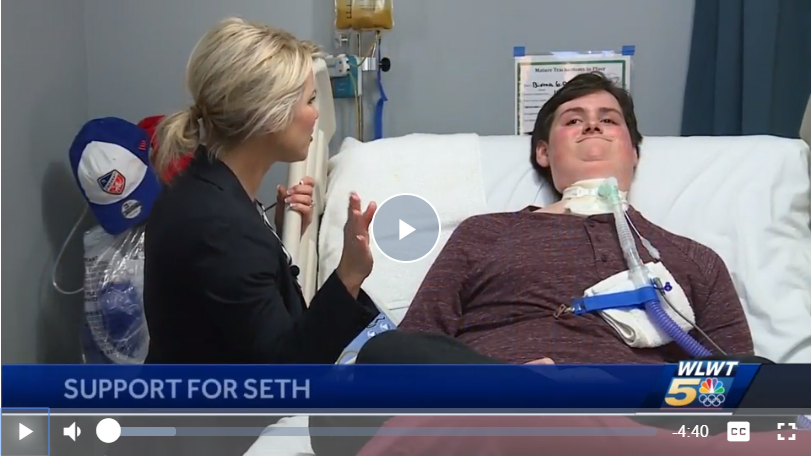 Yesterday, WLWT Channel 5 featured a story about Deer Park student Seth Dryer, who is suffering from a rare disorder known as Accute Flaccid Myelitis (AFM). You can see the story on WLWT HERE.

DEER PARK, Ohio — A Deer Park teenager is fighting to regain his life after an extremely rare and relatively unknown virus took over his body and almost killed him.

Seth Dryer survived, and after spending a year and two weeks in the hospital, he and his family need your help now more than ever.

The only way Seth can communicate now is by raising his eyebrows. He can't talk. He can't lift his arms or move his body. His mind is fully functioning, but he's trapped inside a paralyzed body and has no other way to communicate, other than with his eyes.

His mom, Joni Dryer, wipes away tears as she thinks about her son's future.

"All his plans, all his dreams, they're just gone. He can't do anything that he planned to do," she said.

The only thing more heartbreaking than to watch her son struggle to move and talk is the memory of who her son was, just 15 months ago.

"He latched on to seven or eight buddies in that low brass section, and all of them became jokesters," his former band director, Matt Suddendorf, recalls.

Seth was a sophomore at Deer Park High School and found his passion for playing the baritone with the marching band.

"He and his buddies were excellent music producers, became excellent marchers, and it was devastating when we lost that piece of the puzzle, Suddendorf said.

It happened almost overnight. One day Seth was here, the next he was gone. His mom remembers getting the call at work.

"He's frightened, he's scared. He's freaking out because he can't swallow," she said.

It started with a sore throat but within hours of being admitted to Children’s Hospital, Seth was being rushed into the intensive care unit.

"By that time, he could barely move anything. He could just give thumbs up, and he could move his eyes, and the last thing he said before they put the tubes in, he said, 'I love you.'"

Fighting back tears, she added, "Before that day was over, he was completely paralyzed."

For months, doctors at Children's Hospital didn't know what was wrong with Seth. Was it meningitis? Was it the flu? Finally, the Centers for Disease Control and Prevention confirmed Seth has Acute Flaccid Myelitis or AFM. It's a condition so rare, there have only been 28 confirmed cases in the U.S. this year.

One sentence Seth was able to utter about a month after he became sick, haunts his father, John, every day.

They are chilling words all these months later.

Finally, after a year in the hospital, there was a small victory. Seth is finally home. But he's not only trapped in his body, now he's trapped in his house. Double doors were installed just to get Seth's bed in and out of his bedroom. There's no living room furniture, just boxes and boxes of medical supplies. And his family can't take him anywhere because they don't have transportation.

That's where his Deer Park family is stepping in.

"As long as there is an effort to be made, we are not going to forget them," Suddendorf said.

All week, the high school and local restaurants are holding fundraisers, hoping to raise enough money to get Seth a handicap accessible van.

For his parents and big brother who've become full-time caretakers, they're grateful for every gift -- wheel chair ramp, new driveway, home repairs they can't afford. But what they want most is your prayers.

Until that happens, Seth will settle for a small one. Going to a movie would make all the difference for this 17-year old who just wants to try to live again.

The Deer Park community has already raised more than $20,000 for Seth Dryer. The goal is $100,000 to buy Seth a handicap accessible van.